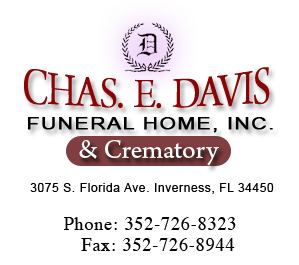 Call Us Find Us

Louise A Michael, 89, Hernando, Fl
Louise A. Michael, 89, of Hernando, Florida passed away on Thursday, February 6, 2014 at her residence in Hernando. She was born on April 23, 1924 in Sayre, Pennsylvania to the late Louis and Mary Piaruli. Louise was a Realtor in the real estate business, and arrived in this area 12 years ago, coming from Gainesville, Florida. Her deceased husband, Max Michael, was a casualty of the Korean War. She never remarried. She raised two children as a single mother at a time when being a single mother was more of a stigma than a badge of honor. She worked many jobs over her life in order to provide a good life for her family. She was intelligent, resourceful, outspoken, and tough. She is the last child to die in her family of seven. She was a Catholic by faith, and loved animals and pets. She also enjoyed volunteer work at the library. She is survived by her children Lewis (Laura) Michael of Astatula, Florida and Maxine Michael of Ft. Lauderdale, Florida. Private cremation arrangements under the care of Chas. E. Davis Funeral Home with Crematory, Inverness, Florida.

MSG Raymond L Michael Jr. US Army (Ret), 85, Inverness, FL
MSG Raymond Linden Michael, Jr., US Army (Ret) passed away on September 9th, 2021 at the age of 85 under the care of hospice at home. He was born to the late Raymond Linden Michael Sr. and Audrey Louise (Shank) Michael on February 4th, 1936 in Romney, West Virginia. Raymond bravely served our country as a member of the United States Army. After 21 years of dedicated service, he retired as a Master Sergeant and became a ROTC Instructor for Dixie Hollins High School in Pinellas County for 15 years. In 1991 he and his wife Patricia made Citrus County their home and he dedicated much of his time to faithfully serving in the local Baptist churches and throughout the community. Raymond was a member of and very involved in multiple veteran organizations and other societies including the Military Order of the Purple Heart Chapter 776, Citrus County Veterans Coalition, Disabled American Veterans, Veterans of Foreign War, Korean War Veterans Chapter 192, American Legion Post FL #0225, Vine Grove Lodge #603 and Osiris Shrine in Wheeling, West Virginia. In the late 1960’s, he was appointed as a Kentucky Colonel by the State Governor. He loved fishing and participated in many bass fishing tournaments with his buddies. Working in the yard and tinkering in his many tool sheds were among his favorite pass times. Family was very important to Raymond and family get-togethers were numerous and memorable. Those left to cherish Raymond’s memory are his wife of 64 years, Patricia; his children, Michael C. Michael of Inverness, FL, Raymond L. Michael III (wife Barbara) of Hernando, FL, and Mark A. Michael of Seminole, FL; his sister, Peggy St. Marie; his five grandchildren, Michael Jr., Sarah, Andrew (wife Sheena), Amanda, and Chase; his great-grandchild, Roxanne; and (Kathy) mother of Michael Jr. and Sarah, and (Paige) mother of Chase. A Celebration of Life was held on Friday, September 17th, 2021 at 11:00 AM at Cornerstone Baptist Church of Inverness, FL. Raymond will be laid to rest at Florida National Cemetery in Bushnell, FL on Friday, October 8th, 2021 at 12:30 PM. Full military honors will be rendered. For those who would like to attend the Florida National Cemetery service, a gathering of family and friends will begin at Chas. E. Davis Funeral Home that morning at 10:30 AM and will last until the time of departure for the cemetery, which will take place at 11:45 AM. Chas. E. Davis Funeral Home With Crematory is assisting the family.

Claire M Michaels, 77, Hernando, FL
CLAIRE M. MICHAELS, age 77, Hernando, died Saturday, July 2, 2011 under the loving care of her family at the HPH Hospice Unit at Citrus Health and Rehabilitation Center. Claire was born on January 9, 1934 in Camden, NJ to the late John and Sarah (McCormick) Armstrong and came to this area six years ago from Westville Grove, NJ. She enjoyed bird watching, flowers and her dog Penny. She was an avid bingo and Pogo player. Survivors include two daughters, Cathleen S. Reed, Longview, WA and Sara L. Holland, Fayetteville, NC, her sister Joan Yerka, Floral City, FL, grandchildren Danielle Holland, Heather Holland and James W. Reed, Jr. and great-grandson Nicholas Holland. She was preceded in death by her husband Gerard Michaels in 1993 and a sister Jackie. Chas. E. Davis Funeral Home with Crematory is in charge of private arrangements.

George Michaels, 80, Hernando, FL
GEORGE MICHAELS, age 80, Hernando, died April 30, 2015 at Life Care Center. George was born on May 11, 1934 in Flushing, NY to the late Henry W. and Emily (Hennesy) Michaels. He served our country in the United States Navy, retiring after 30 years of service as a commissary man and cook. George volunteered much of his free time delivering food for the Church Without Walls food program. He enjoyed going to flea markets. He delighted in his dog Chi-Chi and his truck. A loving husband, father and grandfather, he will be deeply missed by all who knew him. Left to cherish his memory is his wife Agnes E. Michaels; his sons George Michaels, VT, Robert Michaels, RI and Frank Michaels; daughter Lucy Ann Coleman, MS; and stepson Douglas Kenyon, NH. He was preceded in death by a daughter Doris Michaels and stepdaughter Sherrie Pimental as well as all of his siblings. A graveside committal service will be held on Wednesday, May 6, 2015 at 11:00 AM at Florida National Cemetery. The family will receive friends in visitation from 9:30 AM until the procession forms to the cemetery at the Chas. E. Davis Funeral Home with Crematory. The family requests donations to American Cancer Society, Citrus County Unit, P.O. Box 1902, Inverness, FL 34451 in lieu of flowers.